Category: Things to do in Long Beach 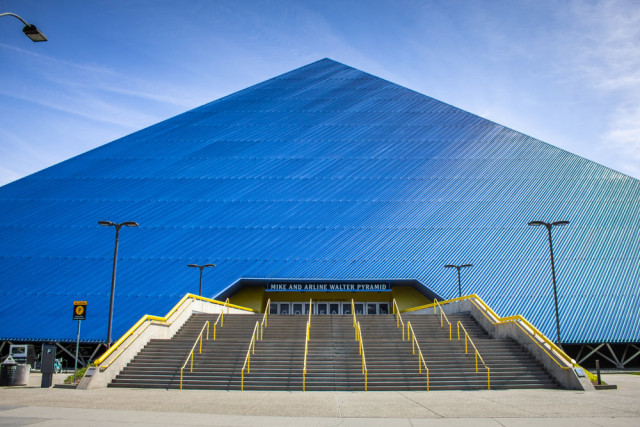 If you’ve ever wondered what that giant blue pyramid in Long Beach is, you’re not alone.

Like the pyramids built in Egypt, is this going to be one of the next wonders of the world?

While both aren’t the case, this pyramid does hold its own special significance.

The bright blue structure is called the Walter Pyramid, and it’s an indoor multi-purpose arena that’s located on the campus of California State University, Long Beach.

HISTORY OF THE WALTER PYRAMID

The Walter Pyramid, formally known as The Long Beach Pyramid, was designed by Don Gibbs and built by the Nielson Construction Company of San Diego.

The name changed to The Walter Pyramid in 2005 after a generous donation from long time supports of the school, Dr. Mike & Arline Walter.

What the Nielson Construction Company did perfectly, was build this area into what is referred to as a mathematically true pyramid, where all sides of the pyramid measure at 345 feet each.

There are actually only 4 mathematically true pyramids in the United States, with one being The Luxor in Las Vegas, another called The Memphis Pyramid, in Memphis, Tennessee, and lastly, a pyramid in San Diego.

This 18 story, $22 million dollar project officially opened its doors in November 1994 and has been a staple location for many CSULB sporting events throughout the years.

The Walter Pyramid is used mostly for is for the men’s and women’s basketball and volleyball programs, but has also hosted many NCAA sponsored events, and also the Southern California Summer Pro League.

A 1-0 start for a brand new area is always the way to go!

There are roughly 200,000 people who walk through the doors of The Walter Pyramid every year, and those individuals always leave with a memorable experience.

Some of the greatest individuals and athletes in the world have graced their presence inside the Walter Pyramid.

A few of the most notable events that have happened in this area include:

June 8, 1997 – “The Dalai Lama delivers a 40-minute speech before some 5,000 Vietnamese expatriates from Orange County. The exiled Tibetan spiritual leader said: “We both remain in other countries as refugees. But on this Earth, in these modern times, democracy and freedom are almost like an unstoppable force… I feel that definitely there will be a change.”

September 29, 2016 – “Candace Parker scores 30 points and Nneka Ogwumike adds 27 points and 10 rebounds as the Sparks win the opener of the best-of-five WNBA semifinal series against the Chicago Sky.”

There are a lot of great features about The Walter Pyramid, most notably the structure and what goes into the technical details.

According to LA Sports, the floor area “comprises approximately 38,000 square feet in a 180 by 210-foot configuration. The floor is all beechwood and the minimum ceiling height is 60 feet.”

Furthermore, “lighting is of broadcast quality, with approximately 150 footcandles available.”

Even their seating system is one of a kind, complete with retractable platforms. Whatever event is going on at the time, including things going on for the students, the seating sections can e hydraulically raised or lowered.

The Walter Pyramid is located on the campus of CSLUB, and parking is available in Lots 13, 14A, and Parking Structure 1.

Here is a handy map of the school and of the Walter Pyramid, so you know exactly where to go when you find parking.

The Walter Pyramid, although it has only been around for less than 30 years, has established itself as one of the premier indoor arenas not only for Long Beach but for the rest of the world.

With the wide array of events that this place holds, this place will continue to be an epicenter of great competition and will get even larger in reputation.

If you haven’t had the chance to make it out this special pyramid, make sure to do so soon!

Looking for convenient hotel accommodations in Long Beach, CA? Hotel Current is conveniently located in central Long Beach just minutes away from all the action of downtown and the famous Walter Pyramid. If you’re looking for even more things to do in the LBC, check out our attractions page. Book your local stay with Hotel Current today!